I am an urban geographer whose research interests straddle three broad thematic areas: 1) urbanization in a global frame, with particular focus on south-south connections; 2) political ecology of infrastructure and environmental practice in South Asia; and 3) comparative geographies of caste and race in India and the US respectively. My dissertation project examined the co-production of environmental sanitation and urban marginality in India by focusing on historical formation, socio-spatial ordering, and everyday workings of Delhi’s ‘modern’ wastewater system in relation to social history and everyday life of the city’s lower-caste sanitation workers.

I am currently working on two research projects. The first project is a comparative study of how the city is constituted as a site of transformative politics in the political imaginaries of the Black Panthers and India’s Dalit Panthers. Building on a ‘minor’ history of engagement between anti-caste and antiracist scholarship and activism, the study uses textual, archival and interview-based methods to map the ways in which the city figures simultaneously as a site of liberation as well as bondage in antiracist and anti-caste ideologies and practices.

In collaboration with two South Asia-based institutions, my second project examines the social and historical lives of centralized sewerages in Mumbai and Karachi as symptomatic sites to elucidate how religious ideologies intersect with environmental governance to produce distinctive geographies of exclusion and structural marginality in South Asian cities. Using ethnographic and historical methods, the study focuses on a situated examination of the political ecology of wastewater governance in relation to the role of Hindu and Islamic religious organizations respectively in everyday forms of labor-management and social reproduction. 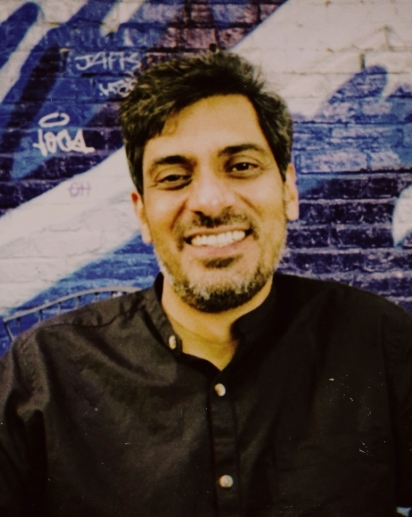 2017. “The City and Its Outcastes: Habitations of Subalternity in Contemporary India,” in a forthcoming workshop titled, ‘For a Poetics of Subaltern Life-Worlds: New Research, New Imaginaries of Informal Economies in Contemporary India,’ Simpson Center for the Humanities, the South Asia Center and the Department of Gender, Women, and Sexuality Studies, University of Washington, Seattle, December.

2017. “The ‘Native’ and the ‘Sweeper’ in the Colonial Urban Sanitation Discourse in India,” South Asia Seminar Series, Interdisciplinary Center for the Study of Global Change, University of Minnesota, October.

2017. “Manholes of the Metropolis: Power, Desire, and Subjectivity in the ‘Hindu’ City,” in a workshop titled, ‘Looking for Butterflies: A Glossary for Living on the Edge in Urban India,’ Department of Geography, Rutgers University, June.

2017. “Untouchable Labor and Wastewater Infrastructure: The Cultural Politics of Sanitation in Delhi,” Department of Geography, University of British Columbia.

2017. “Untouchable Labor and Wastewater Ecologies: The Social Life of Sewers and Drains in Contemporary India,” Department of Geography, University of Colorado, Boulder.

2016. “Untouchable Bodies and Wastewater Flows: Sighting the Nation from the Underbelly of a Sanitary City,” Delhi School of Economics, Delhi University, August.

2016. “Gases, Cockroaches, and Bare Bodies: Dalits and the Politics of Sanitation in Postcolonial Delhi,” Interdisciplinary Centre for the Study of Global Change, University of Minnesota, March.

2015: “Infrastructures of Exception: Sewers and Sewage Workers in Metropolitan Delhi,”

2014: “Sewerage Planning Infrastructure and Caste Politics in Delhi”, in the Conference on ‘Urban Futures in the Asian Century: Uncertainty, Speculation, Experimentation’, organized by the London School of Economics, New Delhi, November.

2009: “Middle Class Mobilization, Urban Reforms, and the Politics of Bhagidari: Observations from New Delhi,” in the Conference on ‘Consent and Contention in Neoliberal Urban India’, organized by the Madras Institute of Development Studies, Pondicherry, India, July.

2009: “The Neoliberal Conjuncture: Refashioning Spatial and Labor Geographies in Delhi,” in the Workshop on ‘Urban Marginality’, organized by the Department of Geography, Durham University, UK, June.

2008: “The Idea of the ‘World Class’ City: The Social and Ecological Impacts of Commonwealth Games in Delhi,” Centre for the Study of Democracy, University of Westminster, London, October.

2008: “Slum Dwellers and Neoliberal Restructuring of Urban Space in Delhi,” presented in the Workshop on ‘Political Ecology,’ organized by the Department of Sociology, Delhi School of Economics, University of Delhi, March.

2007: “The Neoliberal Turn: Slum Dwellers, Civil Society and State Action in Contemporary Delhi,” presented in the National Conference on ‘Expanding Freedom: Towards Social and Economic Transformation in a Globalizing World’, organized by the Indian Council for Social Science Research, Delhi, April.

2005: “The Politics and Aesthetics of the Master Plan of Delhi,” Department of Urban Design, School of Planning and Architecture, New Delhi, October.

2004: “Demolition of Yamuna Pushta Slums and the Making of Neoliberal Delhi,” Centre for the Study of Developing Societies, Delhi, April.

2019: “Manholes of Caste and the Indian City,” presented on the panel, ‘Margins of the Indian City,’ Association of Asian Studies Annual Conference, Washington DC, March.

2018: “The City and Its Outcast(e)s,” presented on the panel, ‘Spatiality and Power in South Asia,’ Association of Asian Studies Annual Conference, Washington DC, March.

2016: “Caste-subalterns are Urban Infrastructure: Valmiki Samaj and the Politics of Sanitation in Postcolonial Delhi,” presented on the panel, ‘Reincarnation after Ruination: The Afterlives of Technologies, Industries and Labor in South Asia’, Annual Conference on South Asia, University of Wisconsin, Madison, October.

2014: “Bernard Stiegler and the Rumor of Posthumanism,” presented on the panel, “Posthuman Political Ecology’, at the Dimensions of Political Ecology Annual Conference, University of Kentucky, Lexington, February.

2013: “Notes from the Netherworld: Sewers and Sewage Workers in Contemporary Delhi,” presented on the panel, ‘Working with the Remains: Waste, Work and the Everyday in Contemporary India’, Annual Conference on South Asia, University of Wisconsin, Madison, October.

2010: “Accumulation by Dispossession: The Politics of Slum Demolitions in an Aspiring World-Class City,” presented on the panel, ‘Urbanization, Liberalization, and Governmentalities’, Annual Conference on South Asia, University of Wisconsin, Madison, October.

2007: “The Capital City or the City of Capital,” presented on the panel, ‘Political Economy of Restructuring and Gentrification in South and South-east Asian Cities’, 5th International Critical Geography Conference, Mumbai, December.

2006: “Land Use Planning and Informal Sector Livelihoods in Post-Independence Delhi,” presented in the workshop, ‘Right to Shelter and Basic Services in Globalizing Mega Cities of India’, co-organized by Centre for Development Alternatives, and Institute of Social Studies Hague, Ahmedabad, India, February.

2005: “Indian Judiciary, Middle Class Activism, and Changing Lives of the Poor in Delhi”, presented in ‘Ensuring Public Accountability Through Public Action’, organized by Institute of Social Studies Trust, Delhi, May.

Batra, L. ‘The Antinomies of Subaltern Urbanism: The Postcolonial City beyond the ‘Identity/Difference’ Paradigm,’ Economic and Political Weekly. (Submission: Oct 2019).