About Prague & Our Program

Prague emerged relatively unscathed from World War II and the Cold War and continues to offer an array of stunning architecture from many periods including Romanesque, Medieval, Renaissance, and Baroque. This culturally rich city of about 1.3 million people, with relatively inexpensive concerts, opera and theater, has become one of the cosmopolitan hubs of Central Europe.

It now faces the challenges of tourism, rising socioeconomic inequality, and historical preservation in the midst of rapid modernization. In and beyond the capital city, the Czech Republic’s peoples continue to negotiate relations with the European Union, as well as the environmental, economic and social legacies of the socialist era.

Students will discover myriad opportunities for cross-cultural learning. Situated in the heart of Europe, Prague is only a few hours away from other cultural centers such as Vienna, Warsaw, Berlin, and Budapest. Founded in 1348, Charles University is one of the oldest universities in the world and has a 35-member Department of Social Geography.

The program will be preceded by an orientation period that includes an intensive program in basic conversational Czech.

Structured field trips will be central to the research in both Geography 37.01 and Geography 86.

One GEOG course numbered between 13 and 59, or permission of instructor.

Our Host in Prague 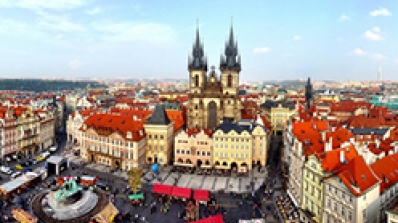 Our Host in Prague